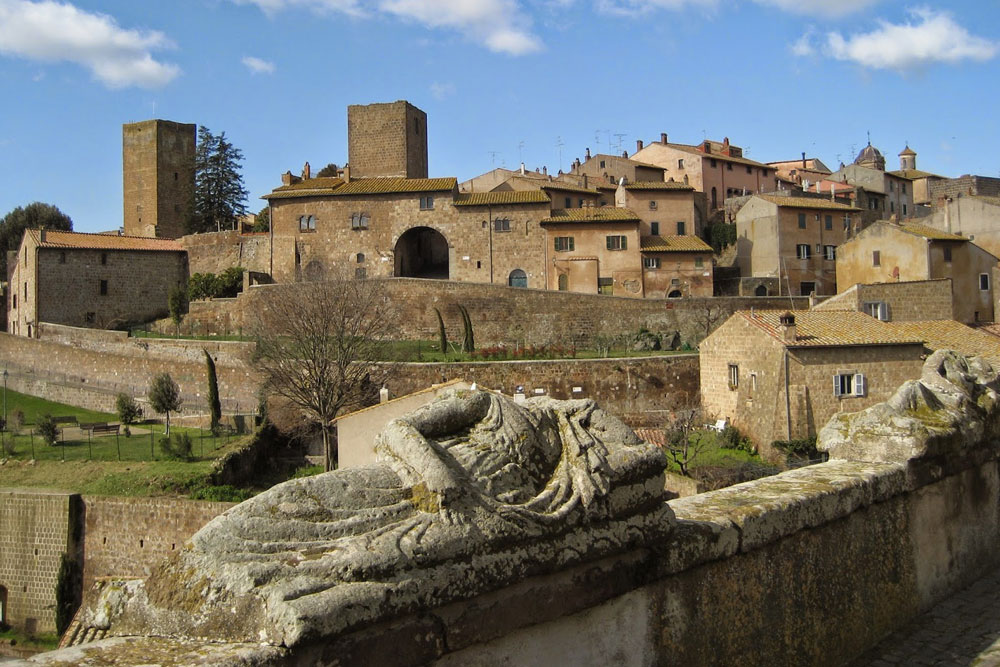 It is said that one of the most beautiful landscapes of Tuscia can be enjoyed from the walls of Tuscania, a city of art in the province of Viterbo, surrounded by a nature reserve. A walk in Tuscania is like stepping into history: while getting lost in the alleys of one of the most beautiful villages of Italy, you will find several traces and monuments dating from the Bronze Age to the Middle Ages through Etruscan and Roman dominations. 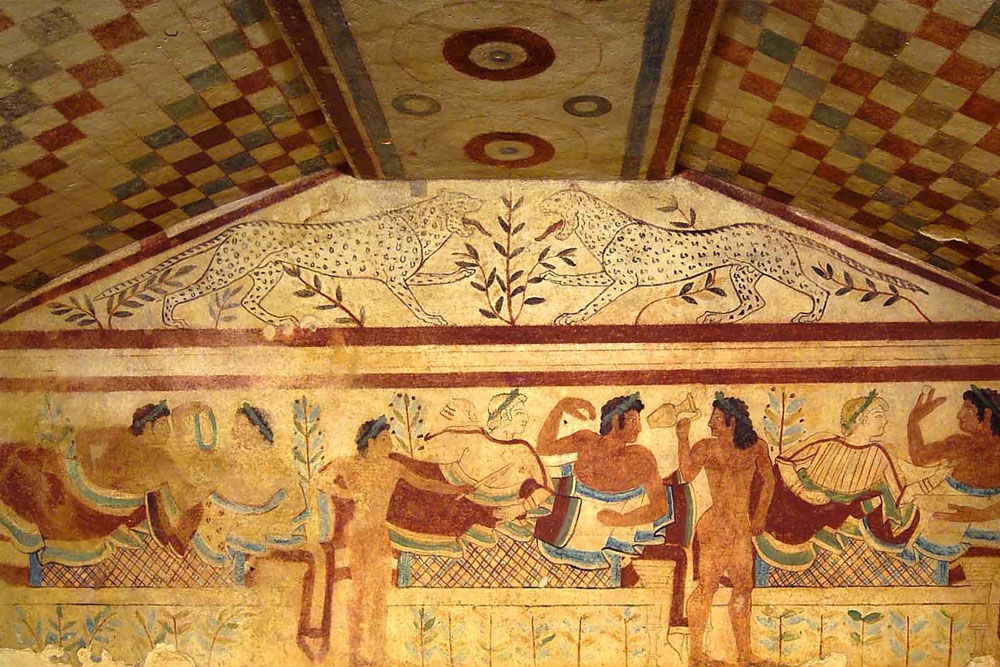 “The first chapter in the history of Italian painting”: with these words Massimo Pallottino, one of the most important Italian etruscologists, defined the paintings of the Monterozzi Necropolis, UNESCO site since 2004.

The hill on which the main necropolis of Tarquinia is located is about 6 km long and extends parallel to the coast, between this one and the hill where the Etruscan city (one of the most important of the Dodecapolis) once stood.

The area of Calvario, the part of the Monterozzi necropolis open to the public, preserves around twenty tombs whose beauty still excites visitors. 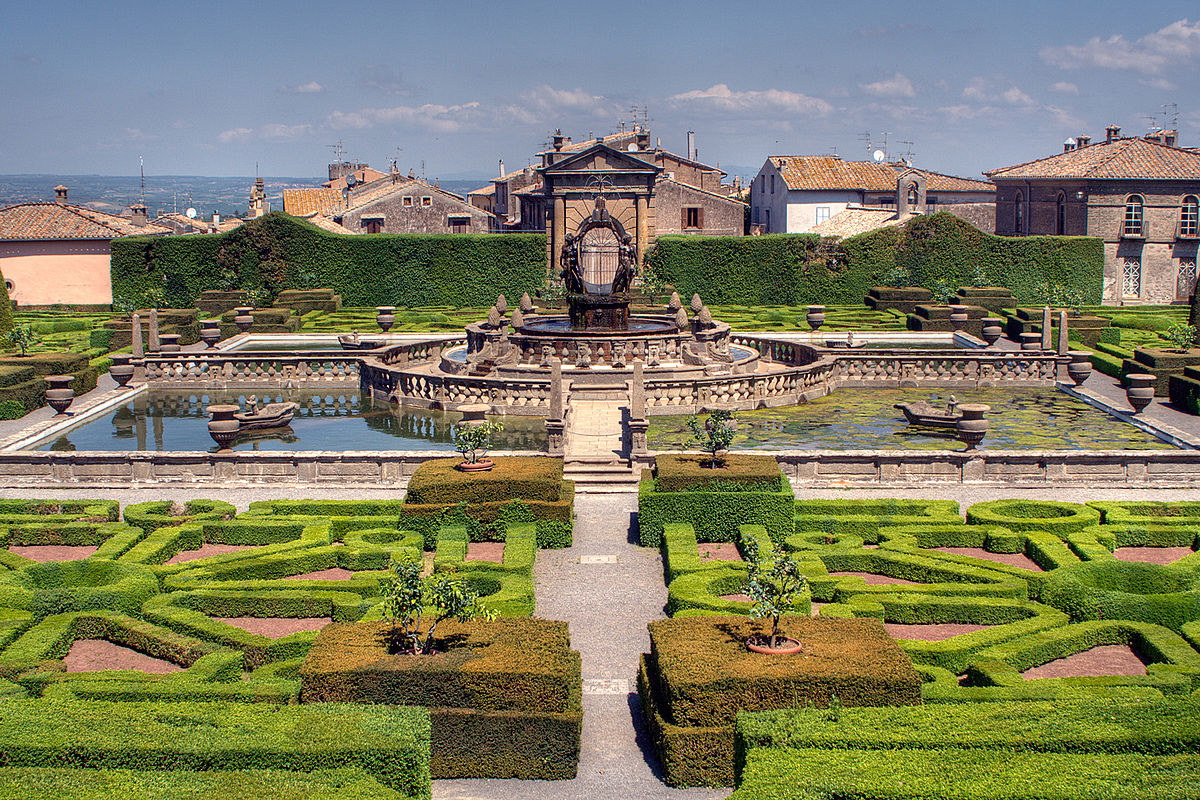 VITERBO AND VILLA LANTE IN BAGNAIA

While walking through the streets of Viterbo you will be immersed in an atmosphere of other times, among splendid architectural jewels such as the Papal Palace, the Cathedral of San Lorenzo, the San Pellegrino district, churches and monuments of different centuries which harmoniously shape the identity of this fascinating city.

Not far from the city centre, in the pretty village of Bagnaia, lies the marvellous Villa Lante.

Built by Vignola in the second half of the 16th century, this splendid monument preserves two buildings adorned with arcades and precious frescoes and one of the most famous Italian gardens, consisting of five levels of terraces on the slopes of a hill. 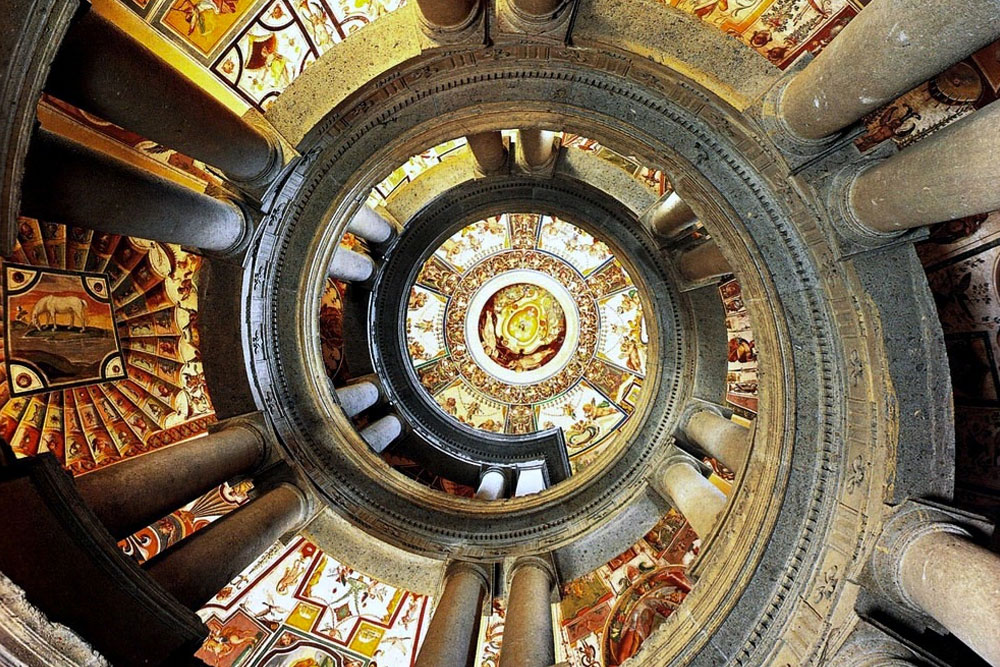 The Palace was initially conceived as a large pentagonal fortress, surrounded by a deep moat, by the famous architect Antonio da Sangallo the Younger on behalf of Cardinal Alessandro Farnese, who later became Pope Paul III.

The visit winds through the Noble Floor, which can be reached through the extraordinary Royal stairs, decorated with frescoes of the second half of the 16th century, considered among the most important in Lazio, the courtyard and part of the wonderful garden. The latter is actually made up of a vast Park, divided into Lower Gardens and High Gardens, magnificent examples of the Italian Renaissance gardens where all the elements, natural and man-made – such as fountains, statues and terraces – merge with order and extraordinary harmony. 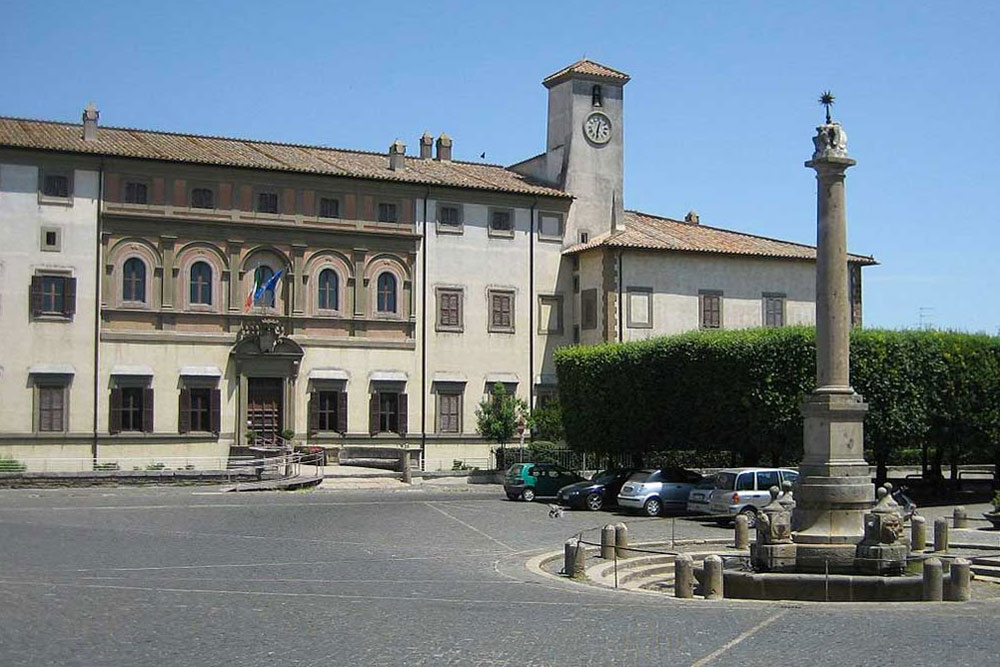 The Altieri family achieved extraordinary power especially during the 17th century when one of its members rose to the papal throne in 1670 with the name of Clement X. They became the princes of Oriolo and Viano (now Vejano) and dukes of Monterano thanks to the Pope’s intervention. Members of the Altieri family enlarged the Santacroce Palace in Oriolo Romano in the second half of the 17th century, enriched it with marvellous frescoes and an extraordinary and unique collection of portraits of popes, donated by Clement X and continued to this day. Not far from Oriolo, they also entrusted the restoration of the ducal castle of Monterano, a place inhabited since the Etruscan era, to very important artists of the period such as Gian Lorenzo Bernini, who also designed the beautiful fountain located in the centre of the town. 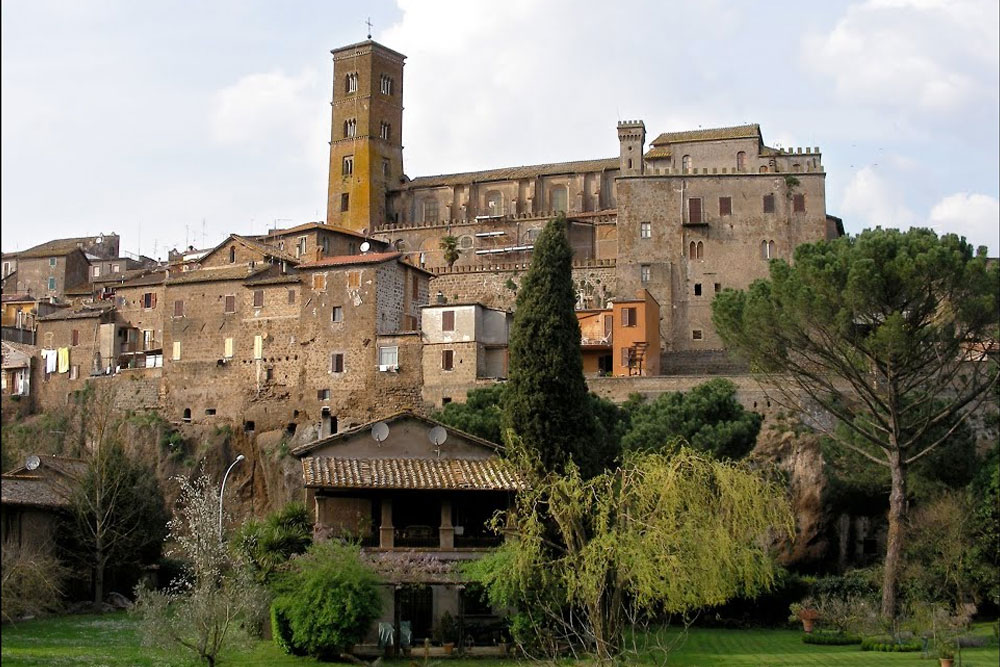 ARCHEOLOGICAL PARK OF THE OLD TOWN OF SUTRI

Sutri was an important Etruscan center, connected to many Etruscan cities, including Veio, on the outskirts of Rome and a bitter enemy of the Romans.

According to tradition, following what would later be the Via Francigena, Carlo Magno passed through here while heading to Rome to be crowned Emperor of the Holy Roman Empire.

The whole area features important signs of its centuries-old history: arriving from Rome, the archaeological area extends along the tuffaceous ridge preceding the town. Here you will admire the tuff-excavated Roman amphitheater (Unesco Heritage), the vast rock necropolis and the evocative Mithraeum, converted into a Christian church dedicated to the Madonna del Parto. 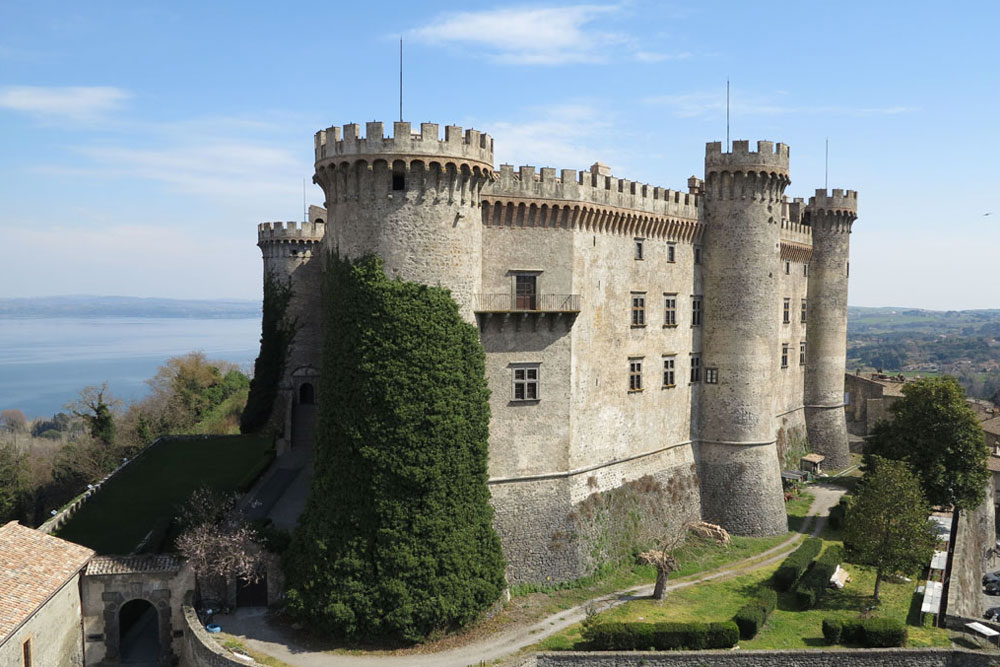 The Bracciano castle, also known as Orsini-Odescalchi castle, is one of the most beautiful and impressive Renaissance residences in Europe.

Internal rooms and museums alternate with outdoor spaces overlooking Lake Bracciano and the mountains behind it. Six centuries of history are told through weapons, paintings, manuscripts and furnishings that every year amaze about 60.000 visitors, who find themselves catapulted into another dimension as they enter the splendid stone corridors.

For our guests, the ownership of the Castle has reserved a special tour including all the most beautiful and evocative corners. 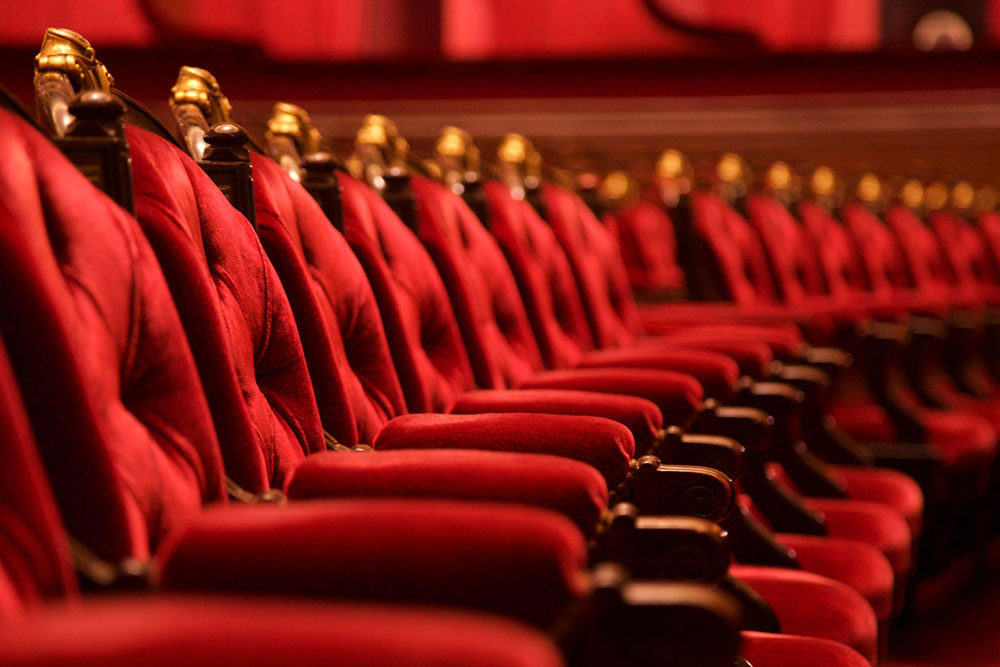 In Canale Monterano there is a small cultural jewel which has been active for years and is loved by the local population. The municipal theatre Maurizio Fiorani is a public, shared and open space that every year hosts high-profile artistic, cultural and social events. Thanks to an agreement signed between Terme di Stigliano and the Canale Monterano Theatre, our guests will be able to reserve the first rows of the shows and will also have the chance to stage private shows to celebrate a special occasion such as a romantic anniversary. 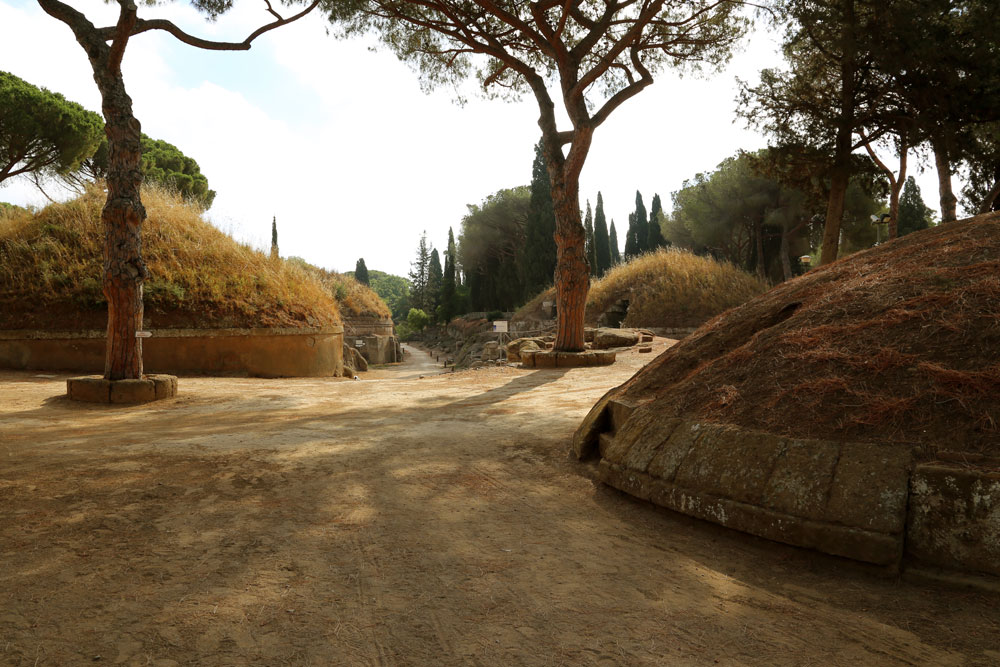 Banditaccia, which extends for 400 hectares near Cerveteri, is the largest ancient necropolis of the entire Mediterranean area. Protected by UNESCO as a world heritage site, it offers a unique atmosphere even just by crossing the central 2 km sepulchral road. The tombs range from the 3rd to the 9th century BC and represent the maximum example of Etruscan funerary architecture. The necropolis is accessible to everyone and offers a wide range of even customizable levels of exploration.